Jose Rizal Pangilinan, Regional Director of the World Scout Bureau Asia Pacific Region will visit Lakeview Park International Scout Centre, Dharmaraja College, Kandy, 6th October to inspect the Guinness World Record established by 1st Kandy Dharmaraja Scout Group with creating the world’s largest neckerchief and woggle to mark their Centenary Celebrations.
Jose Rizal Pangilinan holds a Master of Arts Degree major in Administration and Supervision. He also holds the rank of Commander in the Philippines Coast Guard Auxiliary. Having spent more than 20 years serving scouting, Pangilinan received the Loyalty Award from the Boy Scouts of the Philippines in 2009 and the Gold USA Award in 2012. He also holds numerous awards from other National Scout Organizations in the Asia Pacific Region. 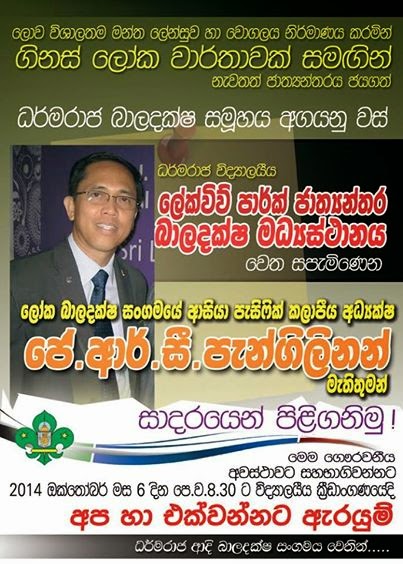 The Regional Director of APR, Mr. J. R. Pangilinan and Mrs. Pangilinan accompanied by Mayor Danilo Asieten and Mrs Asieten will reach Kandy on 6th October to personally inspect and verify the great achievement of 1st Kandy Dharmaraja Scout Group in entering the Guinness Book of World Records.
The 1st Kandy Dharmaraja Scout Group has a remarkable 100-year history in the local and international scout arena with its very first great achievement, the ‘King’s Flag’ which they won for three consecutive years 1917, 1918 and 1919. The Troop had the unique distinction of providing a guard-of-honor when His Royal Highness, the Prince of Wales (later King Edward VIII) visited Ceylon in 1921. The Guard-of-Honor was drawn up on the platform of the Kandy Railway Station and was personally inspected by His Royal Highness, who paid tribute to the Rajans on the very smart turn-out, thereby being the only troop in the East to receive this recognition up to that date in 1921.
Dharmaraja scouts had the rare opportunity to honor the founder, Lord Baden Powell in 1921 and 1924 on his visits to Dharmaraja College. They again had the honor of hosting Mr. Dale Sylvester, Asia Pacific Commissioner of World Scout Bureau, during his visit to Sri Lanka in 1971 and former Asia Pacific Regional Director Mr. Abdulla Rasheed has participated as the Chief Guest at the 1st Kandy Dharmaraja Scout Group’s Centenary Celebrations Jamboree, RISGO in 2013.
From 1993 1st Kandy scouts won the Island Merit Flag for being the Best Scout Group in Sri Lanka consecutively. The 1st Kandy Dharmaraja Scout Group founded by late John Henry de Saram, has the scout centre, Lakeview Park International Scout Centre and its highest point was named as ‘Baden Powell Hill’ to mark the historical visit by the Founder of World Scouting Lord Baden Powell.
Posted by Chaminda Somathilaka at 10/05/2014 No comments: