People's Bank will be a principal sponsor of the 'RISGO 2013', Rajans International Scout Gathering of Centennial 2013  international scout jamboree is scheduled to be held from February 18 to22 at the Lakeview Park International Scout Centre, Dharmaraja College, Kandy.  The RISGO, largest ever scout jamboree in Sri Lanka is organised by the 1st Kandy Dharmaraja Scout Group and Old Rajans Scout Association and the President Mahinda Rajapaksa will be the chief guest at the main rally on February 22.

There are 161 countries from all six regions in this category and there will be representatives from each of these regions with over 6,000 scouts and girl guides, including Sri Lankan participants from all  districts. The Jamboree's theme is 'Towards Global Leadership'. 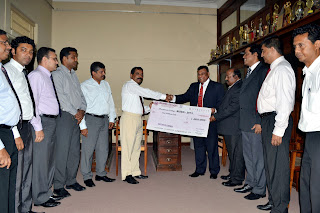 Special thanks to Mr. Sadara Thennakoon for his effort to bring this sponsorship to the event.