Kandy, November 25, 2010: 33rd Annual General Meeting of Old Rajans Scouts Association (ORSA) held on November 20, 2011 at Hotel Lagoon View in Pottapitiya, Kandy. The meeting was attended by its membership, patrons of the association, and staff representatives of the Principal of the Dharamaraja College. The chief guest on the day was Dr. Rohan Wijekoon, Assistant Director of Agriculture, Department of Agriculture who himself is an Old Rajans Scout. 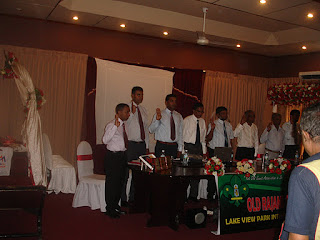 Highlight of the Day

With this particular AGM, the ORSA kick starts its last calendar year of seven years run-up to commemorate 100 years of scouting at Dharamaraja College, Kandy. The meeting was mainly focused on planning and review progress of event to be held on 2013 as Rajans Internal Scouts Gathering of Centennial (RISGO 2013).
Priceless words from former Principal Mr. A.P. Gunarathana and former Group Scout Leader Mr. Bandara Weerasekara provided the courage and strength to the association ahead challenging year.