Our thanks to Chaminda Wariyagoda
Posted by Chaminda Somathilaka at 12/31/2010 No comments:

3 of our well known colleagues who are resides in overseas came to Sri Lanka these days.

Any guess who are they?

B.S.B Karunathilaka,a Rover scout from 1st Kandy Dharmaraja scout Group and member of old Rajans scouts association will be heading to Adelaide, Australia to participate at the 18th Australian National Rover Moot under the invitation of the Australian Scout Association commencing from the 26th December 2010 to 12th January 2011.

He will be participating the event as the only Sri Lankan representative.


Congratulations and Wishing him all the Very Best of Luck!!!
Posted by Chaminda Somathilaka at 12/22/2010 No comments: 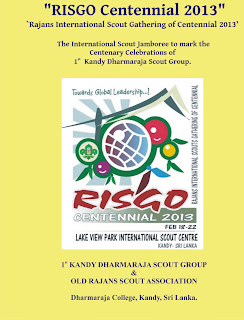 'RISGO Centennial 2013' the centenary celebrations of the 1st Kandy Dharmaraja Scout Group of Dharmaraja College, Kandy which was formed in the 1913 with the guidance of late Mr. J. H. de Saram, the first native Sinhalese Chief Scout Commissioner of Ceylon, after the birth of the Boy Scout Movement in 1907 in the Brownsea Island, England, will kick-off at the Scout Parents' Day on December 17th at the Dharmaraja auditorium at 3.00 p.m.

To mark the centenary celebrations of the 1st Kandy Dharmaraja Scout Group which won the award for `Best Scout Group in Sri Lanka' in 2009 and for many consecutive years, organised the International Scout Jamboree `RISGO Centennial 2013', with the island's first old scout union, Old Rajans Scout Association in grand style

1st Kandy Dharmaraja Scout Group cordially invites to the above occasion to be held under the distinguished Patronage of Prof Rohan Wijekoon, Ast. Director – Department of Agriculture, who is also an Old Rajan Scout.